I don’t normally use my blog to discuss serious topics, mostly because I’m grossly under qualified to discuss them, and I reserve my writing space for happy stuff, or stories of my doing stupid things. But I’ve read a lot about the Harvey Weinstein sexual harassment scandal and most of it has kind of made me want to barf. Mostly because of the level of victim blaming and the number of women who have said “this has happened to me too.”

Mayim Bialik, self proclaimed feminist and actress went on a rant in the New York Times about how she was blessed because she was smart, so men didn’t harass her. She didn’t get manicures and she didn’t flirt. She dresses modestly, so she’s never harassed at work. That’s all well and good, but harassment isn’t about what you wore; it’s about power. A self proclaimed champion of women shouldn’t be telling over thirty women that if they just dressed more modestly and not flirted, they wouldn’t have been sexually harassed.

Bialik wasn’t exempt because she’s smarter, or dressed better. She’s been exempted because she was lucky. We as women need to stop using the misfortunes of those that make us envious or inadequate to feel good. You will never feel good about yourself when you compete against other women. We’re all doing our own thing, so celebrate who you are, not how you’re better…and stop blaming women for being assaulted.

I think Ms. Bialik’s comments rubbed me the wrong way because it implies that women are somehow responsible for being assaulted, or it only happens to attractive women. Never “smart” women, or modestly dressed women. That puts blame on women. It’s their fault; they should have dressed differently, carried themselves differently. But that’s not fair. The fear that comes with harassment and assault lingers (I was afraid to give my mailing address to a friend yesterday, because an ex boyfriend had once asked a mutual friend for my number after stalking me for over a year. That’s one of the after effects of harassment), why add guilt and shame and the feeling of “you did it to yourself because of X,Y, & Z?”

Sexual harassment and discrimination can happen to anyone. I wear a ring on my left hand. I know it impacts my ability to meet men, because it looks like I’m engaged. But I was once sexually harassed at a workplace by a security guard. He refused no, would force me to hug him, etc. He got jealous when a platonic friend drove me home & asked me how dare I. So I bought the ring. Started wearing it. He apologized; didn’t realize that I belonged to someone. I had to be another man’s property for my declination to be accepted. I wore a uniform. How I dressed, my makeup, my hair had no bearing on his actions. It was about him being powerful and desirable, whether I wanted to participate or not. 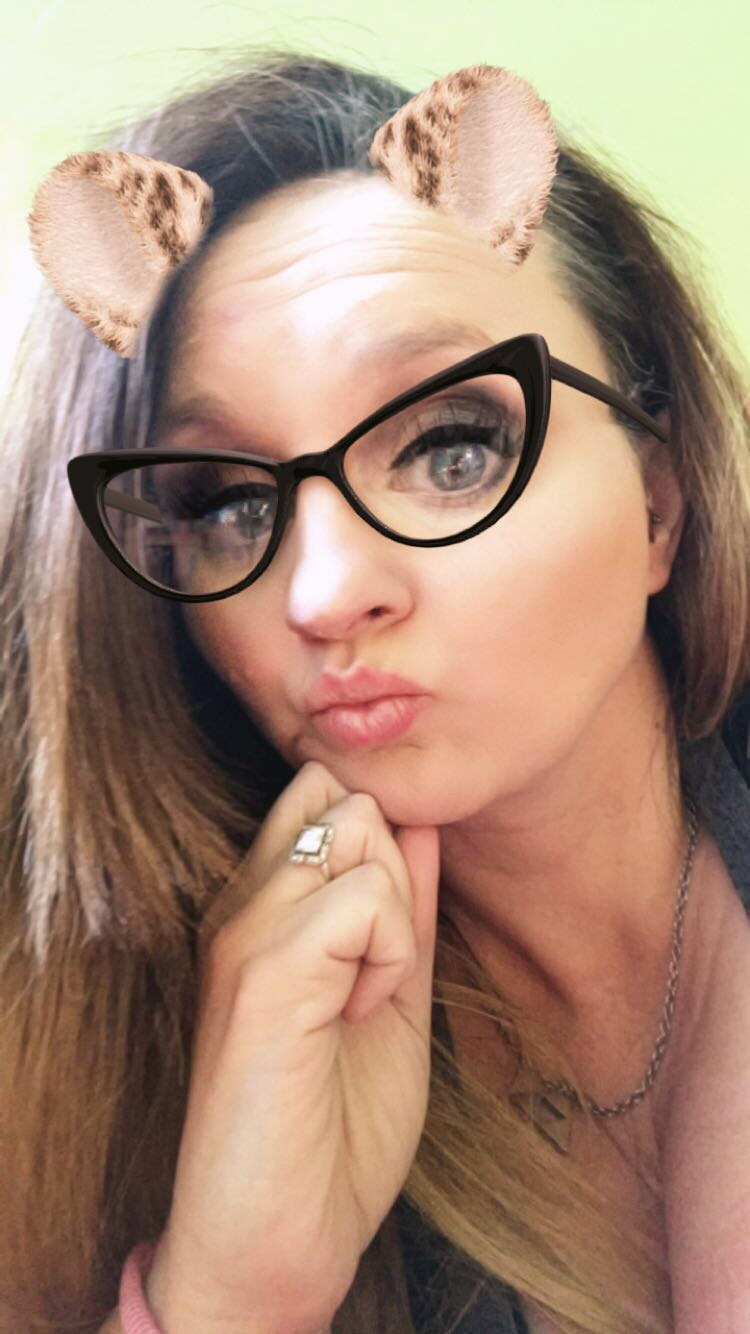 That’s not the only time. I witnessed a trainer in my workplace get told by a newbie rep that she was only good at her job because she was hot. I once wrote an entire blog post about how a stranger grabbed my ass at a Tim Horton’s because he assumed that he could. A customer once screamed at me and threw paper in my face until my male manager had to step in. A grown man once pulled my headphone out of my ear to tell me that my sweater didn’t impress him and suggestions on how I could. I wasn’t even looking at him. This is not behaviour that was brought upon me by my dress or looks. It was brought about because women are told to watch what we wear and men aren’t told to behave themselves. 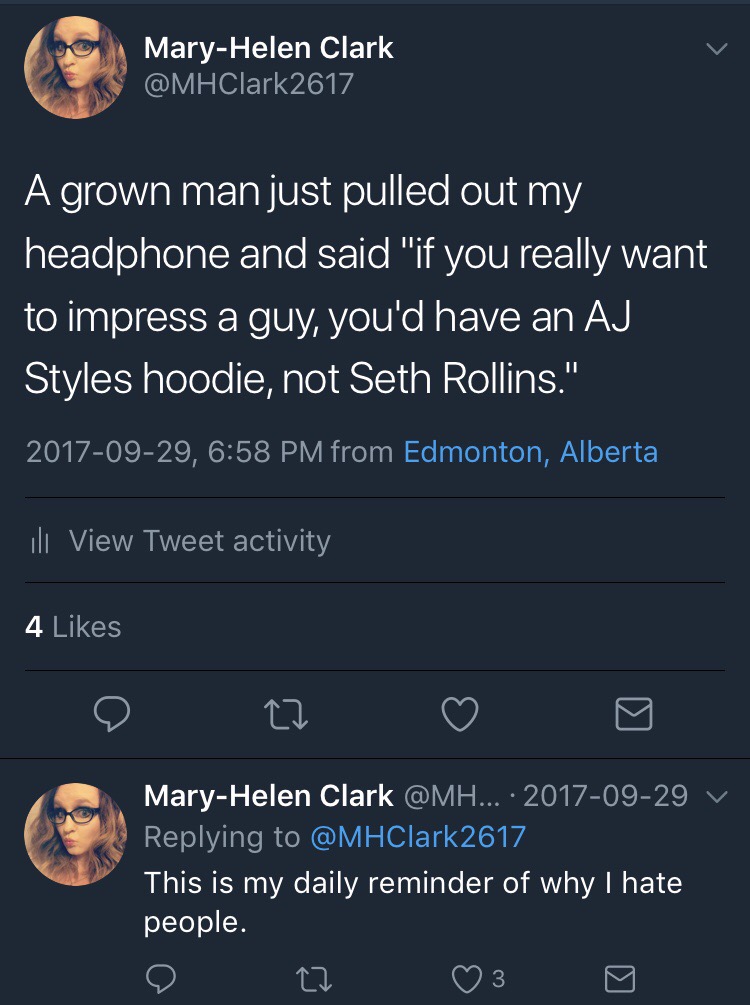 Almost every woman has a story of harassment. Whether it’s a catcall on the street, a male customer saying “not you, a REAL manager,” when they are told the manager is a woman. The guy who calls you sweetie even though you are his superior, or the mansplaining (a man once mansplained my own damn name to me). It wasn’t what we were wearing. It’s not about modesty. We need to stop pretending it’s about modesty or how we carry ourselves and start being open about this stuff happening and support each other, not tearing each other down.

I invite every woman who reads this to share their stories in the comments. Whether you have been subjected to sexual harassment, or you haven’t and want to support women who have, I encourage all of you to speak up. Don’t just say “me too.” Get loud. Get vocal. However, if you’re not ready, me too is good too. But please don’t stay silent. You are not alone. You are not the only woman. It wasn’t how you dressed or if you flirted. It was not your fault. If you have been sexually harassed; I believe you. I support you & you deserved better.

(I understand this deviates a bit from my normal formula of self depreciating wit, I promise to bring it back tomorrow.)

Let me introduce myself. I am a 30 something single mom who lives in works in Canada. I’m not a celebrity, of anyone important by any stretch of the imagination. I have never won an Oscar or an Emmy & my only medal is a silver medal when my eighth grade class represented Thun, Switzerland in the bid for a pretend Winter Olympic Games.

I am, however, a huge supporter of the Olympic Games. Every four years, a school project was dedicated to an Olympic sport. I waited with baited breath & stayed up all night to see if you would let Ross Rebagliatti keep his gold medal. I stayed up all night to watch the Beijing Olympics live. I forced my then boyfriend to sit through events we had never heard of (Keirin? What?) & even saluted when the US teams won medals (even though I’m a proud Canadian). I have six pairs of those red mitts, stuffed mascots & books everywhere. I cry when Canadian athletes stand on the podium & stand for my anthem with pride. I love the Olympic Spirit…

…but I will not watch one moment of the Sochi games.

There are things in life that I love more than the Olympic spirit & those are my daughters, my family & human rights. I cannot in good faith celebrate a host nation that punishes people for loving whom they choose or people who support them.

I’ve read about the state-sanctioned corrective rape, the sickeningly high suicide rates & Vladmir Putin’s claims he’s defending “traditional family.” Fifty years ago, my family was not traditional. A single mother, that wasn’t a widow, working full time while building a career was unheard of! Mariah Carey & Nick Cannon would have been stoned in the street for their interracial marriage & children. Traditions change, families are redefined every day. Same sex families are every bit the new normal. I can’t imagine how anyone could look at photos of Neil Patrick Harris & David Burtka with their children & not see a beautiful & loving family. Traditional is so subjective. BDSM isn’t traditional, is that banned? No Fifty Shades of Gray? Or is that okay because it’s heterosexual relations? But I digress.

As much as I love the Olympic spirit, I love people more. I love my LGBT family members & friends who would be forced to live a horrible life if they were in Russia. I love my daughters, whom I need to teach right from wrong & the Russian law is WRONG. I cannot support the spirit of the games when your host nation breaks human spirit every day. So , you can keep your games; I’ll watch reruns of Glee. I won’t be enjoying any sponsors during the games either. Sorry.

I know I’m a nobody. I’m not Lady Gaga or Stephen Fry or George Takei. I’m just one woman & I won’t affect your ratings or your games. But I’ve always taught my girls that one person has a voice & I am using mine to tell you that what you are doing is wrong. I’m also using it to implore all athletes to use their time to perform well & if they support LGBT families, use this chance to support them. Use the spirit of the games to support the human spirit, the greatest thing we as people have.