“Whenever there is a meeting, a parting is sure to follow. However, that parting need not last forever… Whether a parting be forever or merely for a short time… That is up to you”

This may be the dorkiest thing I’ve ever posted. But my daughters & I were making hilarious Zelda themed crafts yesterday (which prompted Drew to correct our craft like a mega dork) & I got thinking about the time I said every important life lesson can be found by playing Legend of Zelda. 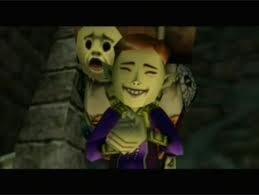 I love the Happy Mask Salesman. He’s so freaking odd. He just wanders around, collecting weird crap, sending Link on weird errands, whatever.

But when Majora’s Mask is defeated & Termina is returned to its former, parallel universe glory, the Happy Mask Salesman says this before heading on his merry way to do…whatever it is he does.

There’s a lot of great lessons in Zelda, like power, courage & wisdom are all necessary for life to continue. One needs all three to truly live & enjoy the fruits of the world. If you aren’t pure of heart, then harmony will be shattered, cursing you to claim only one of these elements, while the other two will fight you to restore balance.

However, the lesson here was that even when you walk away from someone, it need not be forever. While poor Link may never see his beloved Navi again, he does continuously reunite with his other half Zelda in parallel worlds, alternate timelines, faux realities, until finally at the conclusion of Zelda II: The Adventure of Link where the pair have finally unified the Triforce and can live happily together. (Yes, the second game is the last chapter. Yes, I just proved what a nerd I am) Link & Zelda separate & are flung back together no matter what happens because that’s what’s supposed to happen. Even though they part, they wind up together over & over, facing down the most frightening force in Hyrule together.

(Side note: Zelda > Peach. Both get kidnapped but Zelda gets rescued, grabs a bow & helps Link kick serious ass) 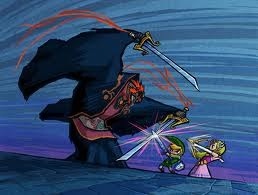 See? A good lesson in Zelda!

Unfortunately, we don’t have any Happy Mask Salesmen wandering around to impart knowledge to us here in the regular world (unless you count Drew, he’s definitely a Happy Mask Salesman sort of guy. Spewing knowledge, delegating authority, sending me on crazy errands, although he has yet to ask me for Bunny Ears. I have another friend who is definitely a Happy Mask Salesman, chilling in his fortress, imparting wisdom…& the niners), so we sort of have to figure it out on our own. What’s good, what’s evil (pro tip: Majora’s Mask = evil), and where we belong. It’s funny how someone who seemed to play such a minor role in one part of Link’s journey became his compass in the next. But that’s the thing about wise ones: usually the person you would look to for guidance the least may have the most to offer.

One thought on “Half Moon (Evil Moon…Whatever)”